Hi friends! 👋🏻 Today I tweeted about wanting to read a book for a particularly silly reason, and it got me thinking about other weird and silly reasons why I wanted to pick up a book.

Although these reasons can be pretty ridiculous, they’re still valid reasons. Any reason for wanting to pick up a book is a good reason to me, so it doesn’t really matter why! But, it’s still fun to share, so here are my reasons.

I liked the cover

Don’t say that you’ve never picked up a book simply because you liked the cover. We humans are visual creatures, we like nice things so it’s only natural to go for books with nice covers.

Most recently, I picked up Daughter of the Moon Goddess because I was immediately drawn to the cover art. Did I know anything about the legend it’s based on? Not a thing. Did that matter to me? Not at the time because I was too busy ogling the cover, but now I do know about it and I’m glad that I do.

There are always going to be times when the cover is better than the book inside, but it never hurts to give something a try because its outsides are nice.

This isn’t something that I do anymore, but when I was just a wee teen blogger, I was more easily influenced by what everyone else was reading. I caught all of the latest trends, knew exactly what was popular and made sure to read the most popular books so that I didn’t feel out of the loop with everyone else.

Book blogging has changed a lot since I was a teen – and so have I – so thankfully I don’t do this anymore, but I wouldn’t blame anybody for wanting to read the current Big Thing so that they had something to talk about with their friends.

it had vampires in it

Sometimes vampires just make everything better. If Lost Souls was pitched to me as being about a teenage boy who feels like he doesn’t fit in and runs away from his adoptive household only to unknowingly end up in an incestuous relationship with his father, I wouldn’t have touched it with a ten-foot pole because ew, gross. I was, however, told that it’s a vampire story first and foremost, which it is, but there are still the incest parts which just make me feel slimy, but that was the point so I guess the author succeeded there.

I’m getting away from my point, but it doesn’t always matter to me what a book is about, if there are vampires there, I’m sold*.

*there are obvious exceptions for me, of course.

it was by one of my favourite authors

Is this really that silly of a reason? Probably not but there have been times when one of my favourite authors has announced a book that would usually sound like something I was completely uninterested in, but I’ve still been excited about it because it’s by one of my favourites.

This hasn’t necessarily happened in a long time, but if Scott Westerfeld were to decide to drop fantasy and sci-fi in favour of contemporary stuff, I would still seek it out and read it because he has yet to disappoint me. Or if Leigh Bardugo randomly decided to write adult erotica, I trust her to do a good job of that so I’d still pick it up.

the main character had the same name as my cat

This is the most recent silly reason for wanting to read a book and I think it is the most valid of them all. The main character of Book of Night by Holly Black is Charlie Hall, which happens to be my cat’s name if you do that thing where the pet’s last name is the same as the owner’s, which we do in my family (and at the vet).

My cat has absolute main character energy so you can’t blame me for this one. Just look at him: 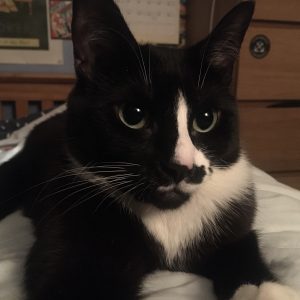 What’s the most superficial reason for you wanting to pick up a book?